This repair is my first foray into the almost-microwave realm.

So, what was wrong with this SA? I bought it unresponsive to the front keyboard commands.

After cleaning the contacts the unit started to be responsive, but the pushbuttons were rather stubborn against my attempts to clean them.

However, there was no response from any input signal if I hooked the cal signal from the back to the input. As I could see the LO feedthrough I was confident that the YTO was working as well as the IF section.

What appeared to be faulty was the input attenuator. Time to disassemble the RF section which wasn’t as simple as I would have liked: rigid coax and SMA connectors had to be dealt with as well as a lot of screws (and I’ve also lost a couple of them… I’ll buy them next time I do an order)

Inside the RF section after a 2GHz filter there is a 6db attenuator  which was obviously toasted: two resistor were burnt, and a capacitor followed them.

I am still not sure if the input attenator was faulty from the start or if I fried it testing the equipment.

Anyway, back to the repair. The service manual I found is not for the MS610A but for the MS610B and of course the schematic for the 6db attenuator is different from what was inside the RF section of my SA. However after a quick simulation I was convinced that some resistor and capacitor I had in my junkbox would be enought to test if the unit was working or not.

They did and I finally got a response from the SA when I hooked its cal signal. However the unit was not as sensible as it should have been and I couldn’t get the gain calibration right.

As the 6dB pad was fried I suspected that something happened to the first mixer too. There is no schematic for the first mixer, but looking at the PCB it looked like a double balanced mixer.

Unfortunately I wasn’t able to find any information about the 4 discrete diodes that made up the mixer: there was nothing about them in the parts list, no schematic, no marking that helped me identify them. It wouldn’t have been easy to find 4 matched diodes anyway.

I decided to try to substitute them with HSMS-282R, a SOT-363 package with 4 Schottky diodes inside in a quad ring configuration, exactly what I needed.

Desoldering the old diodes was easy, soldering the SOT-363 a little bit less easy. However, after reassembling the RF section, I got the spectrum I expected so at least replacing the 1st mixer was a success.

I cannot consider this repair complete because I am still not able to calibrate the SA with its own cal signal. Moreover, I should find the proper components for the 6db attenuator before going on with the repair.

I have misplaced four key caps and finally found them inside a toolbox. What was I thinking when I put them there?

I finally remembered to order the three capacitors I needed for this repair in my last order and so I went ahead and did the repair.

To reach the main board I didn’t exactly follow the service manual: after opening the HP 6634A I just pulled out the transformer and then the main board. Done that it was easy: clean the pcb, solder in the three capacitors and then done.

I also calibrated the HP 6634A… it appears that someone calibrated it without setting up the proper connections on the back. Now it works as it should.

I was hoping to write a post about the calibration of my HP 6634A as the output voltage was a bit higher than what it should have been but as you can guess from the title that didn’t happen.

Anyway, the day I decided to calibrate the HP 6634A I powered it up and also my HP3457A as they needed to warm up before operating to spec. 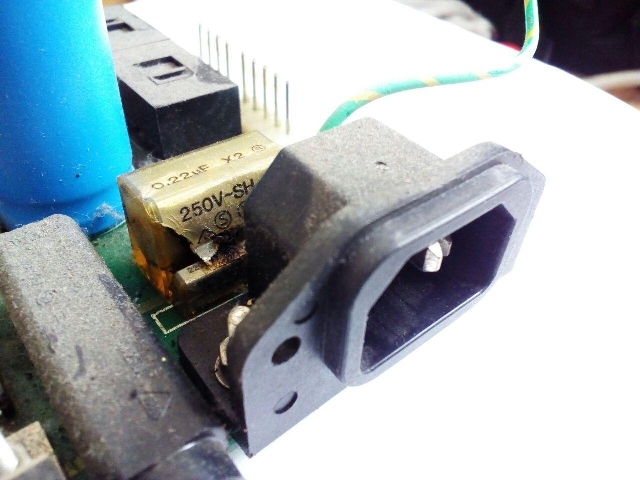 As two other line filter capacitor didn’t look good I removed all three of them. As soon as I get to place an order for components I must remember to add the capacitors.

As I wrote here I added this counter to my collection. However it didn’t work right and I was rather sure that I wouldn’t have time to fix it anytime soon.

I was wrong. Yesterday I took a pause from what I was doing and decided to have a look.

A cover was bended so it wouldn’t close properly and the cover screws were missing but both things are easy to fix.

Inside there was nothing wrong with the power supply and just a couple of cables loose inside.

Turning the unit on the display was clearly wrong: missing digits, missing annunciators and so on.

Reassembled the Display Assembly I tested the counter with what I had handy and it seems to work. I will check it better later but I am rather sure that it is ok.

Just to be sure I removed every board inside the counter and cleaned their contacts.

However the power switch lever is broken off so in the end I will replace it and it will be a proper repair. Still boring.

I didn’t really need another counter. Moreover I really, really didn’t need another broken counter to repair because I don’t have the time to repair it.

However I could’t resist this one: it came with the HP10544A crystal oscillator and it measures up to 500MHz (and even higher… not to talk about the plugins). My other counters will stop around 100MHz.

I’ll talk more about this unit when I will fix it (hopefully) but if you are curious you can read the June 1974 issue of the HP Journal.

HP t5540 again: netinstall of Debian on a SSD

I already talked about this thin client

Everything worked fine but the case was a bit hotter than I would have liked with a SATA HD crammed inside. So I decided to buy a SSD to play a bit.

The SSD is nothing to write home about: a KingDian S100, 8GB.

I disassembled it because I didn’t want to install a mostly empty case inside the t5540.

Everything worked almost fine, but I had some problem to netboot the thinclient. After having configure dnsmask for dhcp and tftp, for whatever reason it didn’t want to correctly load pxelinux.0

I ended up using the configuration that worked to netboot a V20z (it was a CentOS install) changing some bits here and there because I wanted Debian on the t5540.

I can say that netbooting is really nifty when it works… just install dnsmask, set it up as a dhcp and tftp server, create the directory you need and put the netinstall files inside. Then understand why the thin client happily accepts its ip address but refuses to load vmlinuz after having got the pxelinux.0 it likes.

And then a quick hack to give the thin client internet access to do the real install.

However now the t5540 happily reports that its OS is Debian GNU/Linux 9 (stretch), the kernel is Linux 4.9.0-4-686-pae and everything is fine again so it is ready to do some work.

I wonder that I am going to install and try on the thin client… ufw, nodejs, sensors…

I am a fan of wired ethernet connections.

This may or may not have to do with my interest in ancient/obsolete/old workstations and their operating systems.

You can forget to use a wifi connection with your old Sun Ultra 1 but you can probably use wired ethernet.

However, sometimes you cannot run an ethernet cable.

You can power the VAP11G from a USB port but just forget about it (remember, old workstations = no USB). Just use a 5V adapter and you are ready to go,

I was lucky as my unit can be configured with its webpage. So, just connect to the VAP11G (192.168.254.254 or just use wifi as you will probably want to do this with a somewhat recent personal computer) and configure it to connect to your Wi-Fi network.

Done that, plug the VAP11G in an old swith and let your DHCP server work its magic.

“A man with a watch knows what time it is. A man with two watches is never sure.”

I would also say that a man with a voltmeter knows what voltage it is. A man with two voltmeters is never sure.

Posted in Equipment, Small Talk | 1 Comment
We use cookies to ensure that we give you the best experience on our website. If you continue to use this site we will assume that you are happy with it.Ok